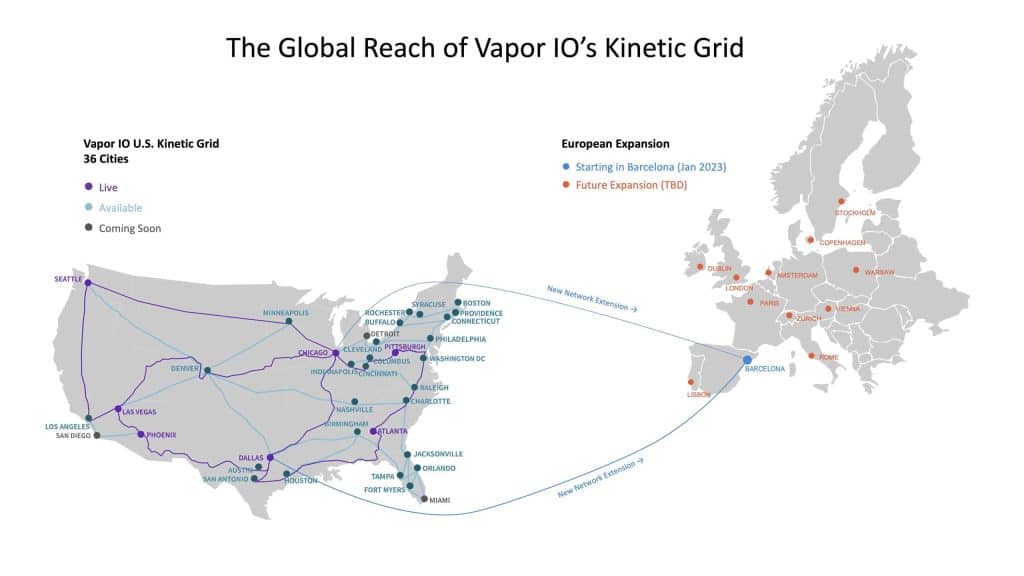 Vapor IO, a provider of edge computing infrastructure and services, has announced that it is partnering with Cellnex Telecom to expand its Kinetic Grid platform into Europe. This partnership will provide customers to place low-latency workloads in Vapor IO facilities at the edge of wireless and wireline access networks.

Vapor IO’s CEO, Cole Crawford, commented, “Vapor IO and Cellnex share a common commitment to neutral host infrastructure. Our Kinetic Grid is cloud-neutral and carrier-neutral, meaning it is one of the few locations at the edge where both carriers and clouds can meet on equal terms.”

With Vapor IO’s neutral host architecture, the company says businesses can reduce expenses and enable new use cases with scalable delivery. The Kinetic Grid platform operates in 36 US markets, including Atlanta, Chicago, Dallas, Las Vegas, Phoenix and Pittsburgh. With the new partnership with Cellnex Telecom, Vapor IO aims to provide its services to Europe as well.

Cellnex Telecom owns a portfolio of over 138,000 sites across Europe, including forecast roll-outs up to 2030 in countries such as Spain, the Netherlands, France, Italy, Switzerland, the United Kingdom, Ireland, Portugal, Austria, Denmark and Sweden.

“The collaboration with Vapor IO is part of our strategy to reduce barriers to entry for telecoms and broadcasters, enabling them to roll out their services in a simpler way by leveraging our infrastructure with Vapor IO’s Kinetic Grid platform at the edge,” stated Cellnex’s CEO Tobias Martinez.

With this new partnership with Cellnex Telecom, Vapor IO says it will expand its reach into Europe, providing customers with access to low-latency workloads.

“It is expected that in the coming years, there will be an explosion in applications and services that require computing in places physically closer to the end user, which implies an increase in the demand for this type of infrastructure,” added Eduardo Fichmann, the global director of innovation and product strategy at Cellnex.

Compass Intelligence has bestowed Vapor IO with the 2022 Edge Computing Company of the Year award. This recognition is due to their aforementioned Kinetic Grid platform.