As people are confined to their homes and social interactions and work move online due to the coronavirus pandemic, the Body of European Regulators for Electronic Communications (BEREC) together with the European Commission have addressed the rising demand for network connectivity and how companies can successfully deal with it. This week, the two bodies announced they have established a process to deal with potential issues that might arise with telecom networks.

“We are currently not seeing any major congestion problems and network operators seem to be coping well with the higher traffic load in the networks. But we nevertheless need to stay vigilant and be ready for if the situation changes. This is an extreme and unprecedented situation we are witnessing and we have seen over the past couple of days just how quickly things can change,” said BEREC Chair Dan Sjöblom, in a prepared statement.

According to the Open Internet Regulation, telecom companies can employ traffic management measures to avoid network congestion, which might be necessary given the current global health situation. In normal circumstances, ISPs are required to treat all traffic equally. But with video traffic growing rapidly as more people watch over the top (OTT) video services and video-conferencing services for work, there have been concerns about the ability of access networks and peering exchanges to handle the increased traffic.

To properly monitor internet traffic and ensure transparency in the Union, the European Commission and BEREC, with the support of National Regulatory Authorities or competent authorities, will establish a reporting system.

“BEREC is in the process of establishing a special reporting mechanism and we will clarify how this will work in further communication. We expect this work to be ready soon, as we are not looking to build a completely new monitoring structure, but rather strengthening already existing mechanism for information sharing among National Regulatory Authorities,” added Sjöblom.

Last week, YouTube announced it was reducing streaming quality in the E.U. by switching to standard definition (SD) from high definition (HD) for 30 days to save bandwidth. The decision came after Netflix said it would reduce bandwidth by 25 percent, a measure first deployed in Italy and Spain.

European operators have reported a high increase in internet traffic, but BEREC and the EU Commission have not yet detected significant problems.

“Capacities in our own network are regularly expanded on a long-term basis. We always plan for about twelve months in advance,” said Dr. Thomas King, CTO at DE-CIX, in a prepared statement. “We continue expanding as soon as 63 percent of the existing capacities are reached. The remaining 37 percent free capacity is needed to create redundancy and to ensure that we always have enough free capacity for traffic growth.”

In the U.S., Verizon identified a 20% increase in web traffic on its network in one week, while Vodafone reported a 50% increase in Europe.

In the last six weeks, ThousandEyes research has found that ISP outages have spiked globally and warns about an upward trajectory due to the coronavirus spread. Nearly a 100% increase was noticed in the U.S. between February and March. Providers don’t always have full control over what affects traffic loss, as external causes may be to blame for outage incidents. 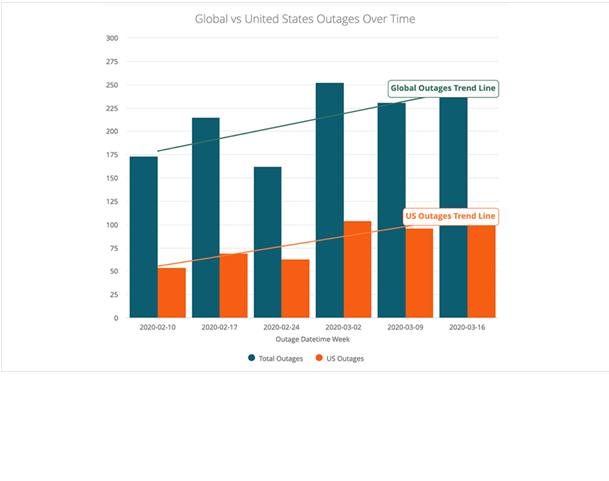 A 20-minute disruption was noticed last week, for example, where domains could not determine an IP address, keeping users from accessing services. UCaaS usage will likely increase in the following weeks.

Public cloud providers AWS, Microsoft Azure and Google Cloud did not see any negative impact on performance following the surge in internet traffic this past month.

So far, most service provider access networks are handling increased traffic owning to rapid shifts in user behavior. Video traffic makes up a disproportionate amount of the recent increases across the globe. CDN service providers like Akamai, CenturyLink, LimeLight Networks, and Verizon Digital have built distributed compute, storage and network systems to help deliver this content and are continuing to perform this function well. There are also companies such as Qwilt who are enabling service providers to embed these capabilities into their networks (see related Guest Post).

Looking further down the road, the combination of video being created and distributed over mobile networks along with IoT sensors for smart buildings, smart cities and other applications will require content and application delivery systems to be embedded even further into the access edge. Expect also to see network interconnection to move from centralized locations like London (UK), Amsterdam (NL), San Jose, Los Angeles, Virginia and New York City (US), to other metropolitan areas.