There have been some remarkable industry changes in IoT adoption over the past three years, according to a global and cross-industry executive survey that lays the foundation for The Economist Intelligence Unit’s Internet of Things (IoT) Business Index.

While at first there was little, negligible advancement even in the technology’s adoption, the situation has significantly improved for both internal and external-facing IoT adoption since 2017, the survey found.

“Most companies are (perhaps to their frustration) still in the early phases of their IoT journey,” the report’s authors said at the time.

Compared to 2017, companies are now far more prepared to implement IoT-powered products and services, especially in internal operations such as equipment or energy consumption monitoring. Between 2017 and 2019, a 135% growth of smart speaker ownership was registered in the U.S. market, for instance.

“If you look at the retail and consumer-device segment [of the IoT], adoption is far greater than it was in 2017,” Regu Ayyaswamy, global head of IoT and engineering services at IT services provider TCS notes in the report. “If you go into a [US electronics retailer] Best Buy today, there will be an aisle full of smart home products, from cloud-connected security cameras to garden sprinklers that react to weather data.”

As many as 82% of executives interviewed said their companies assigned higher budgets for IoT investment, while in 2017 only 62% were considering a higher spending on IoT projects. While one in five companies has increased investment in IoT technology by at least 50%, 10% of manufacturers have at least doubled it, and were impressed with the return on investment.

Citing Berg Insight figures, the report says that by just 2018, some 34 million vehicles with connected telemetry systems were already on the market, while there were 10 million connected streetlights and 61 million cargo tracking devices.

Companies have been typically looking into single, application-specific IoT projects, but return on investment value has surged as the data has started being used for predictive or prescriptive analytics, as part of multiyear strategies. This brings it to the future of IoT data use for strategic purposes, the report says.

Respondents acknowledged the importance of data in implementing IoT investment strategies which have until recently been more focused on monitoring products and operations, instead of prediction and design. According to 16% of executives, “the use of the IoT at my organization has been informed by an overarching data strategy.”

IoT adoption leaders are IT, infrastructure and food and agriculture industries, all in “early implementation phase.” 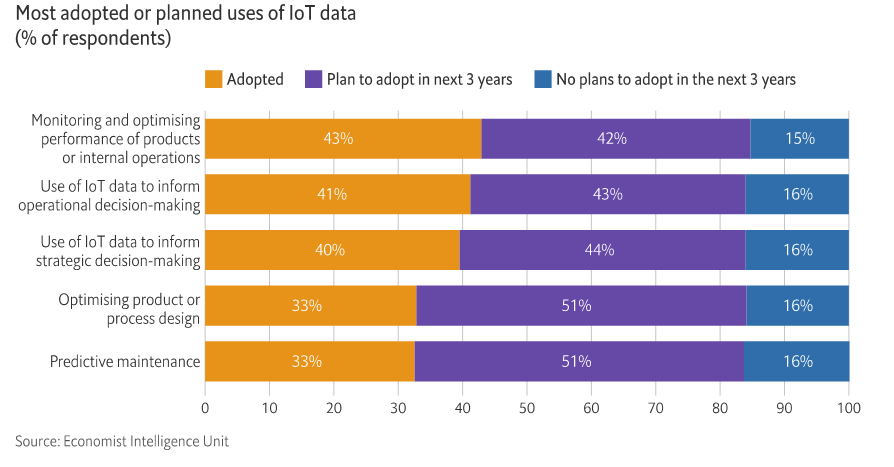 Due to advanced analytics and prediction capabilities, IoT data are decisive in AI projects, according to 26% of executives, while more than 60% feel “the value of IoT data to my organization has increased as we have developed our AI capabilities.”

Predictive maintenance has registered a high adoption rate in construction and real estate (44%), automotive (41%), and infrastructure (36%), while manufacturing held back at just 25%.

“When you start with the IoT and just use it for data collection, it may not yield much business value until you connect [that data] with other systems and eventually value chains,” Ayyaswamy explains in the report. “We are now seeing our customers connect multiple value chains using the IoT, and that is where the true power lies.”

Security remains one of the roadblocks in IoT consumer adoption, according to 45% of respondents; however, representatives from the consumer goods and retail industries disagreed. While 37% blame security concerns for not moving forward with IoT adoption, 55% claim to have the expertise and resources to adopt IoT technology.

The IoT Business Index 2020: a step change in adoption was sponsored by Arm and it is based on a survey of 825 business executives that was conducted in late 2019. It confirms a growing interest in IoT adoption which has slowly moved from planning to practice, following an understanding of IoT data value and its potential once merged with other data sets for advanced analytics.

5G IoT connections reach $8 billion in the next five years

By 2024, estimated revenue from 5G IoT connections will reach $8 billion, registering a more than 1,400% growth from $525 million in 2020, says a new study from Juniper Research. As 5G connections will grow into a key revenue stream for operators, 5G adoption will be led by the automotive and smart cities sectors, accounting for 70% of all connections in the next five years.

“Management tools for the newly-enabled services are key for users managing large scale deployments,” writes research author Andrew Knighton. “We believe that only 5% of 5G connections will be attributable to the IoT, but as these are newly enabled connections, operators must view them as essential to securing a return on their 5G investment.”