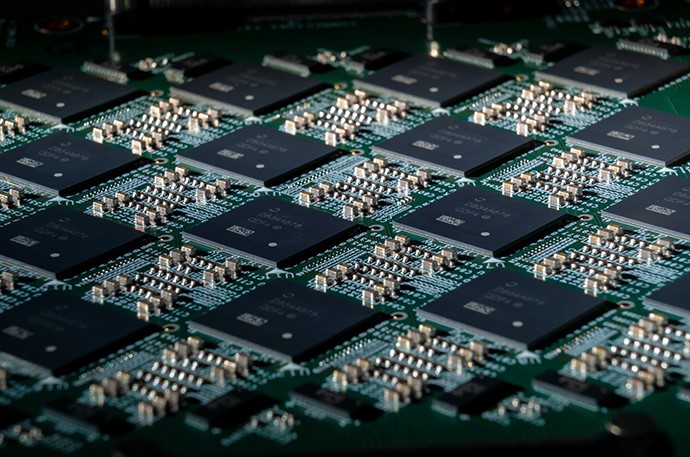 Three years after Intel Corp. introduced its Loihi neuromorphic computer chips, the company has chained 768 of them into a chassis providing the computational capacity of 100 million neurons.

A hamster has that many natural neurons. In this case, Intel is making the equivalent of a rodent brain for edge computing, where ultra-fast operations and ultra-low power use are most prized.

The newly integrated chips are part of a new cloud-based research system that Intel calls Pohoiki Springs, which is being made available to members of Intel’s neuromorphic research community. The group was formed two years ago to experiment with what was then a test version of the Loihi chip.

Probably because the Pohoiki Springs is aimed at an internal research audience rather than commercial production, no price has been announced for the system.

Company executives describe Loihi chips as being up to 1,000 times faster and 10,000 times as efficient performing certain functions. The integrated processors exhibit extreme parallelism and asynchronous systems, which account for the performance improvements.

Mike Davies, director of Intel’s Neuromorphic Computing Lab, was quoted in electronic-engineering publication EETimes, said the Pohoiki Springs does not work the same way artificial intelligence systems do, and it is hard to compare them.

Neuromorphic systems function in a way not unlike how living brains function. As such, they are better for different tasks than one generally would feed to artificial-intelligence algorithms.

He said this method is well-designed for edge environments because it enables models that can adapt and learn from the real-time samples.

Intel said researchers are working on “promising, highly scalable algorithms” to take advantage of the new architecture. They include constraint satisfaction, searching graphs and patterns and optimization problems.

The smallest neuromorphic system Intel has, the edge-focused Kapoho Bay, has 262,000 neurons, which is on par with the brain of an ant.

Previous Article:
Nokia offers 5G IoT networks as a service
Next Article:
Use Case: Gradient Racing, edge software from LF Edge team up for the win