UP9 announces Mizu, the 0pen-source API traffic viewer for Kubernetes

For debugging and protocol testing, Wireshark has long been one of the favorite open-source traffic monitoring tools used by IT professionals, engineers and students. Capturing TCP/IP packet status in real-time and displaying it in human-readable format was key aspect of the Wireshark adoption. In that same vein, UP9 has launched an API-based traffic viewer for Kubernetes called Mizu as an open-source tool. Mizu can be used to view all API (Application Programming Interface) communication between microservices for debugging and troubleshooting.

For complex distributed systems, an API traffic viewer is a resource that can be used to detect the root cause that affects performance. API monitoring is important for edge applications as they can capture and help in analyzing data in real-time; Mizu also allows the user to create alerts that notify in case an issue arises.

“As developers, we’ve always known that API traffic including payload inspection is essential for troubleshooting problems. More recently, we’ve realized that such capability is missing for Kubernetes developers and decided to carve out that piece of technology and contribute it as a standalone open-source project,” said Alon Girmonsky, CEO and co-founder of UP9. “Mizu removes the guesswork that is inherent to any troubleshooting process, by unpacking all API traffic, no matter the protocol and without requiring any code instrumentation,” he said. 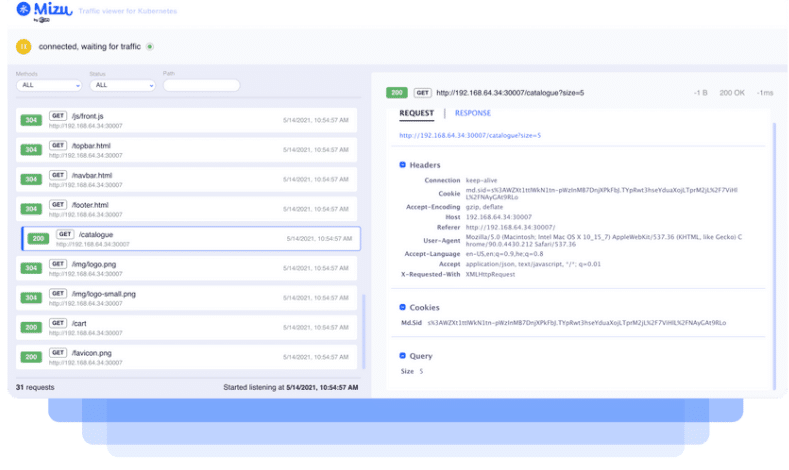 An example of viewing Kubernetes’ API traffic in the Mizu local webapp
Source: UP9

Inspection of API traffic and API payloads became challenging as the API traffic increased overtime — creating hurdles in mission-critical applications. To solve the troubleshooting of Kubernetes API traffic, UP9 has provided Mizu with automatic inference and visualization of service dependency map, and automatic reconstruction from API traffic. Featuring filtering and query expressions, Mizu enables developers to find the bottlenecks present in microservice communication.

Mizu supports several protocols with a real-time view of all HTTP requests including REST and gRPC API calls along with Kafka, AMQP (activeMQ/ RabbitMQ), and Redis. The tools can run on all the three popular operating systems, MacOS (even supports Apple M1 silicon), Linux and Windows. Easy integration with the Kubernetes cluster, the software works by injecting the container on the node level. The operation can be performed on-demand through command line interface (CLI).

The CLI is built on GoLang programming language and can be downloaded and run without any prior installation. The software always observes specific pods through regular expressions allowing you to capture traffic from multiple pods. Going beyond the scope of the primitive API traffic viewer, Mizu for enterprise offers the same functionality but with some upgrades like administrative tooling, Mizu daemon and increased storage.