The future is here and it’s distributed: What the metaverse is and why it needs edge computing 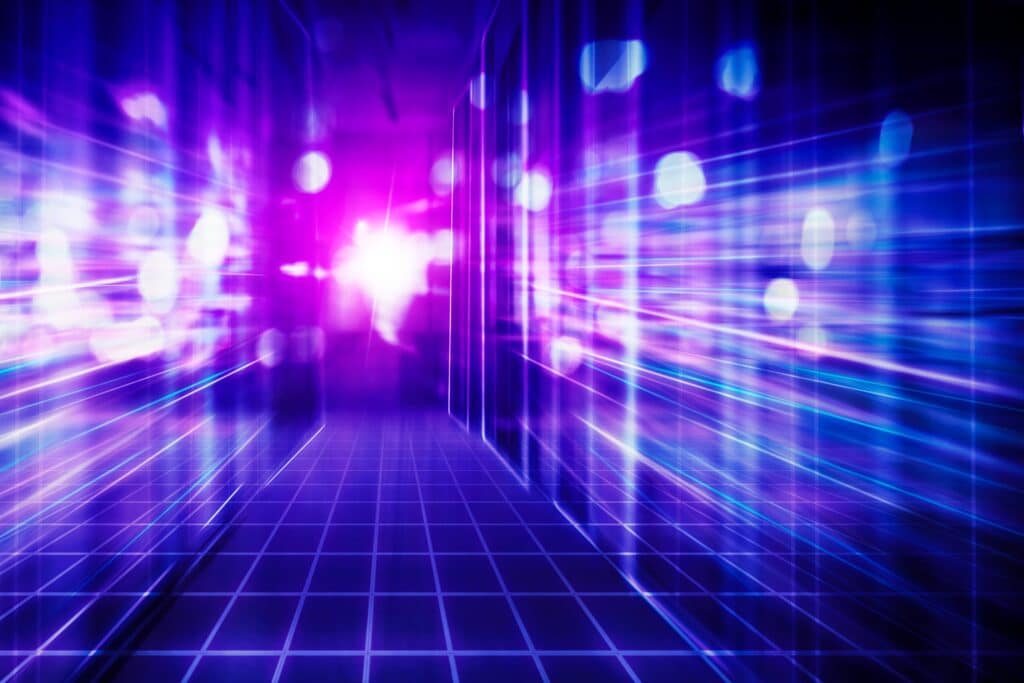 The end of 2021 saw a Big Bang of sorts for interest in the “metaverse”, with Google searches increasing roughly 2,000% since Facebook rebranded as “Meta.” Companies like Meta describe it as a new and amazing world where you can go anywhere and do anything. It could be a virtual space where you can communicate with people from all over the world, no matter what language they speak and you can switch from one reality to another as effortlessly as switching from one TV channel to another.

Or you may get motion sickness and be feeding an “omnidirectional panopticon,” according to Mark Pesce, an early pioneer of 3D on the internet.

In this article, we discuss some of the past, present, and future of the metaverse — and why edge computing is a critical building block to the metaverse.

What is the metaverse?

The metaverse, like edge computing, has a lot of competing definitions. Essentially, it is frequently described as a collective 3D digital space that people can access through virtual reality (VR) or augmented reality (AR) technology. However, if AR and VR technologies are already available, what’s different about the metaverse?

According to venture investor Matthew Ball, the metaverse is a “massively scaled and interoperable network of 3D virtual worlds” that are rendered in real-time. People’s identities and data (including digital possessions) will persist across platforms and devices.

Some advocates say it is a world where people can be anything they want to be, able to inhabit new realities and transform into other creatures, people, animals, aliens with a full experience of whatever world you’re in. You’ll be able to visit places you’ve never been before and feel like you’re there in person.

A less charitable assessment is that the metaverse, much like Facebook’s bid to rename itself “Meta,” is little more than a rebranded pastiche of ideas and technologies as companies vie for control over a new version of AOL’s walled garden.

A brief history of the metaverse

In Neal Stephenson’s 1992 novel “Snow Crash,” the world is connected through a shared virtual reality space called the “Metaverse.” In this futuristic, online space, avatars can interact with one another in real-time. Since then, virtual reality has become a staple of science-fiction storytelling and has been featured in popular films like Ready Player One.

The idea of a shared virtual reality space is not new, but it didn’t really take off until the 1990s when there was a surge in popularity for interactive games using 3D graphics. For example, in 1997, LucasArts released an adventure game called The Curse of Monkey Island which allowed players to explore a 3D environment using their mouse cursor.

Over the years, many companies have tried to create immersive 3D environments with varying degrees of success and long-term viability. The closest analog to today’s metaverse came on the scene in 2003 when Philip Rosedale’s Linden Labs developed Second Life, which offered users an immersive experience through avatar interactions and voice chat.

While virtual reality and holograms grab the imagination, AR is likely to be a more realistic interface for most users to the metaverse in the near term. AR refers to any technology that adds digital information to the user’s visual and/or auditory perception. Data is superimposed over existing surroundings; because the data is contextual, it is tailored to the user’s physical orientation and a task. This helps the user to solve the problem and complete the task.

The use-cases for AR alone are numerous, spanning enterprise and public service sectors, including education, marketing and advertising, automotive, manufacturing, healthcare and retail. Enterprise adoption of AR is gaining momentum because the benefits, including cost savings and worker safety, can be significant.

According to a report from IDC Research, spending on AR is expected to grow from $2.7B in 2021 to $48.6B in 2025. “Use cases will integrate AR with AI-centric products, IoT, new devices, and smart analytics to build knowledge networks that enable workforces to digitally access the data, people, and workflows that help them perform their work fast, efficiently, and safely,” according to the report.

The building blocks of the metaverse

Any virtual metaverse is ultimately rooted in physical infrastructure.  With AR/VR experiences already widely cited as a key use case for edge computing, the same holds for the metaverse. The requirements for metaverse experiences include:

Edge computing offers a distributed infrastructure that is placed in data centers close to users and connected by high-speed wired and wireless networks (including 5G and LEO satellite services).

VR and AR headsets are part of the interface to the metaverse, but as Jon Radoff writes, many layers of an interoperable ecosystem comprise the metaverse, with infrastructure at the foundation. 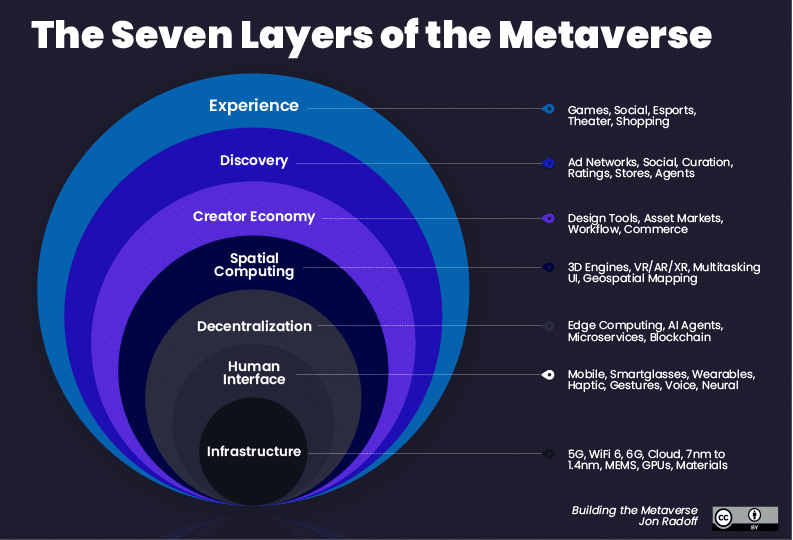 Radoff, CEO of Beamable, a provider of tools for game development and monetization, places edge computing at a decentralization layer, along with blockchain technology, though edge computing does also comprise a physical infrastructure layer. In any case, blockchain technologies will be increasingly intertwined with the use of edge infrastructure.

“The metaverse is not “a” metaverse. It is the next generation of the Internet: a multiverse. The abundant adventures in this space will surround us both socially and graphically,” Radoff writes. His hope: a Switzerland-like metaverse that is enabled through decentralization.

From GPUs and AI processors to edge data centers on up the networking stack to application development and orchestration platforms, all the many forms of edge computing will eventually have a fundamental role to play in building the metaverse.