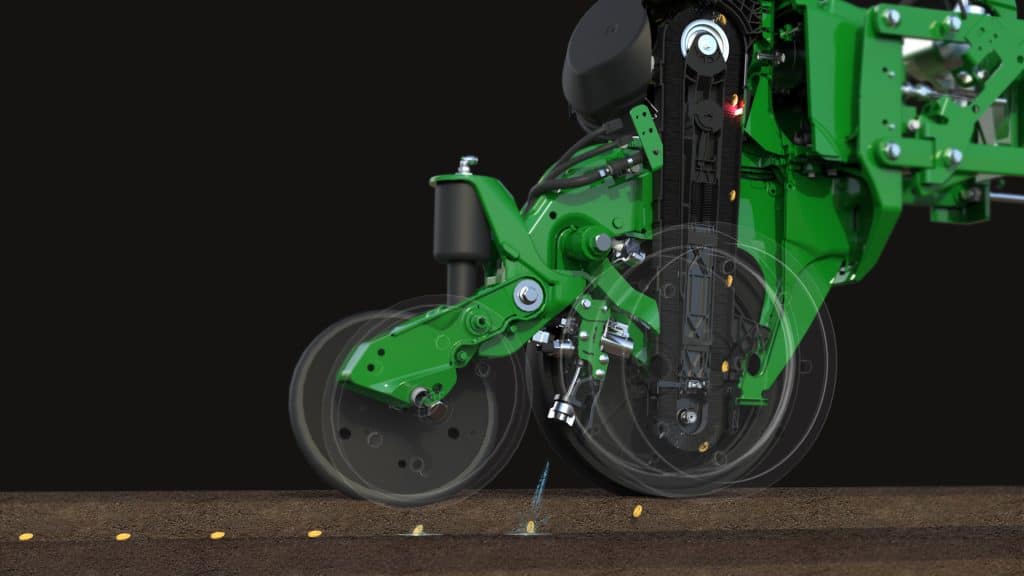 “Everything we do at John Deere is focused on real purpose and real impact,” said Jahmy Hindman, CTO at John Deere. “This means we’re developing technology that enables our customers to provide the food, fuel, fiber and infrastructure that our growing global population needs.”

The ExactShot system optimizes fertilizer application for individual seeds. ExactShot leverages a sensor to detect when each seed enters the soil, prompting an automated robot to administer 0.2 ML of fertilizer directly to that seed in real-time.

John Deere says the system may save over 93 million gallons of starter fertilizer annually across the United States and prevent wasted fertilizer from encouraging weed growth or running into a waterway.

In addition to ExactShot, John Deere has also unveiled its electric excavator powered by a Kreisel battery. With fewer moving parts, this excavator will also reduce noise pollution and emissions while providing improved reliability and performance. Further, with the new charging technology, John Deere claims that it has decreased costs while allowing for faster connections to the electrical grid.

Despite Deere & Company’s storied history of providing agricultural, turf, construction and forestry equipment since 1837, there have been some recent stumbling blocks. In 2022, an independent researcher jailbroke John Deere equipment. He demonstrated how to break into an old Deere monitor at DEFCON and played the classic first-person shooter game Doom on Deere’s hardware.

Farmers have also been vocal in their dissatisfaction with Deere’s monopoly on repair and service. They have accused the company of taking advantage of its overwhelming market position to inflate prices on parts and services.

To that end, US farmers and independent repair shops will now have greater access to the tools and software needed to repair John Deere farming equipment, thanks to a new memorandum of understanding signed by the American Farm Bureau Federation and John Deere.

The agreement is a win for supporters of the ‘right-to-repair’ movement, which calls on companies to provide spare parts and make repairs easier for consumers. It comes after years of requests for companies to make spare parts available to customers, particularly in the farming and technology sectors.

“A piece of equipment is a major investment. Farmers must have the freedom to choose where equipment is repaired, or to repair it themselves, to help control costs,” stated AFBF President Zippy Duvall. “The MOU commits John Deere to ensuring farmers and independent repair facilities have access to many of the tools and software needed to grow the food, fuel and fiber America’s families rely on.”