BrainChip to start 2022 by shipping edge AI chips in volume

BrainChip Holdings Ltd. is gaining notoriety for its chips in the growing market for edge AI applications, having made a debut in a new all-electric Mercedes-Benz concept car in January. Recently, BrainChip started taking orders for two development kits integrated with the Akida AKD1000 edge AI processor for internal testing and validation.

Last month, the manufacturer announced the beginning of the full commercialization of its Akida AKD1000 AI chip through the availability of mini PCIe boards. BrainChip said its solution is a viable product to unlock increased functionalities for Smart City applications as well as digital consumer health and smart home devices. As the market for customized hardware has grown, the manufacturer pledged to offer full PCIe board design layout and bill of materials to system integrators and developers — enabling them to design custom boards and deploy the Akida AKD1000 chip as embedded accelerator or co-processor. 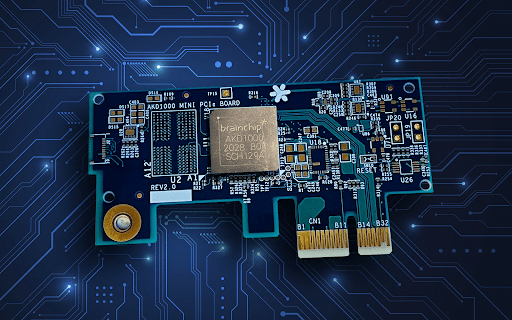 “We have been working on developing our Akida technology for more than a decade and with the full commercial availability of our AKD1000, we are ready to fully execute on our vision,” said Sean Hehir, BrainChip CEO.  “Other technologies are simply not capable of the autonomous, incremental learning at an ultra-low power consumption that BrainChip’s solutions can provide. Getting these chips into as many hands as possible is how the next generation of AI becomes reality.”

BrainChip said the PCIe boards are immediately available for pre-orders on the BrainChip website, starting at $499.

There was a revamp inside BrainChip in 2021 with the appointment of Sean Hehir as the new CEO and the appointment of Jerome Nadel as CMO, who will lead the team for product marketing as it moves toward achieving full commercialization of its Akida neuromorphic computing platforms. BrainChip said 2021 was its “most successful year” with several technological advancements and marketing upgrades. Among all the milestones achieved, Akida AKD1000 is the most successful production chip designed by BrainChip. Additionally, the company introduced MetaTF, a machine learning framework that works within TensorFlow.

In a January regulatory filing (BrainChip is publicly traded on the ASX),  the company revealed it reached $1m in revenue for 4Q 2021. The company has also been granted its ninth patent.