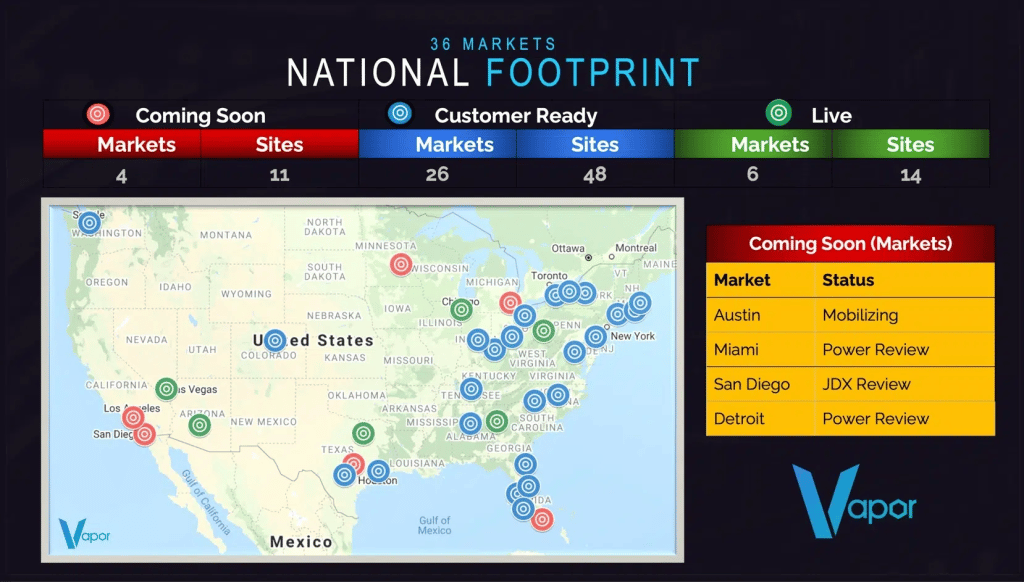 Vapor IO has announced that its Kinetic Grid is now available in 32 US markets. According to Vapor IO, there are already six live deployments and more US markets are currently “Customer Ready.”

With Vapor IO’s just-in-time delivery model, a customer can sign a contract and have a market live in under 90 days. To make this happen, Vapor IO says the 32 markets have fully completed the most time-consuming work, including signing land leases, pulling permits, pouring concrete foundations, digging fiber laterals, etc. The only differentiating factor between Customer Ready and live markets is the actual Vapor Edge Module deployment and commissioning.

“We’ve been working tirelessly to meet demand and bring the Kinetic Grid to additional markets,” said Cole Crawford, founder and CEO of Vapor IO. “We’re thrilled to announce the availability of the Kinetic Grid in 32 US markets as of today.”

Both carriers and clouds have equal standing with Vapor IO’s Kinetic Grid, which is cloud-neutral and carrier-neutral. Vapor IO’s neutral host architecture equilibrates the power dynamic between clouds and carriers, lowering overall expenses and allowing for new use cases with scalable nationwide delivery.

Some everyday use cases include:

“Our Kinetic Grid platform is enabling new use cases with new economics, reducing the time, cost and complexity of our customers’ multi-market edge deployments,” stated Crawford.

Previous Article:
Okta report shows Zero Trust security approach continues to gain momentum
Next Article:
Data Fabric: What is it and when should enterprises use it?