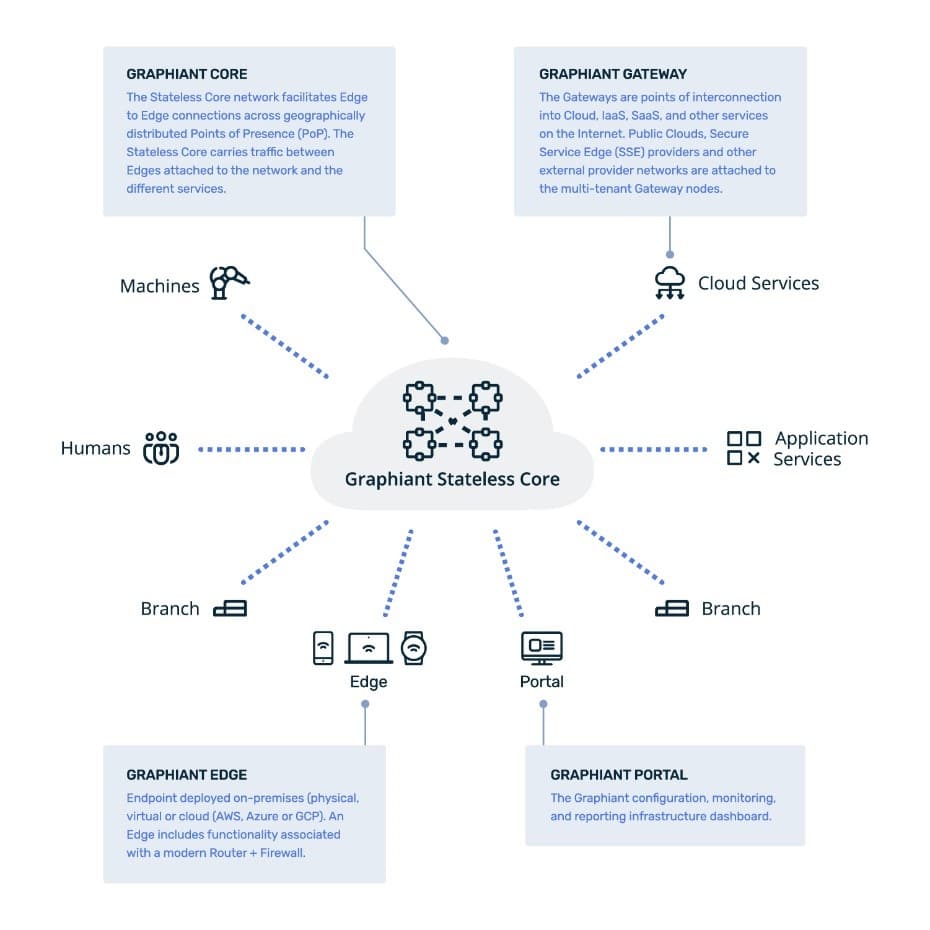 According to the company, Graphiant Network Edge enables organizations to tackle today’s most challenging use cases with Internet-class agility, including enterprise connectivity, business-to-business connectivity and cloud connectivity.

Graphiant says its solution is unique as it doesn’t require building new networks for each resource, edge network, customer hybrid cloud and partner. Instead of handcrafting each connection using VLANs, each resource connects to Graphiant’s Stateless Core. The Graphiant Core then handles all routing and the traffic remains encrypted throughout the process, with SLA-grade performance guaranteed.

Swimming against the SASE and SSE tide?

Graphiant’s goal to replace MPLS as well as SD-WAN, itself billed as a lower-cost replacement for MPLS is bold. While similar on the surface to SD-WAN service providers, Graphiant’s Raza told EdgeIR in an interview that his company’s architecture will enable customers to “Programmatically add network to build all kinds of network edges.”

The problem with SD-WAN as well as MPLS is that both require too much manual setup of complicated policies and network paths. With today’s applications and cloud services being dynamic, a different model of networking that is truly programmable is needed, he argues. “We’re not just placing automation on existing infrastructure. The business value of our solution is a programmable network. [Customers] can control paths for workloads,” he said, noting that applications themselves can request path characteristics.

Security is a big part of Graphiant’s pitch as well. Encrypted network traffic can be routed and re-directed without the compute overhead of encryption/decryption of packets required by other services. That said, the company isn’t going down the SASE path.

SASE is Gartner’s name for secure access service edge, which is a combination of networking and security services that are primarily delivered through a cloud-based delivery model. SASE offerings, in theory, help simplify network management by offering highly customizable policy-based control that can be tailored by user identity, session context, and application needs for performance and security.

“The biggest problem with security and network merged into a common platform is that if something goes wrong, it’s hard to identify the problem,” Raza explained. “The second problem is if I try to decrypt packets, performance is impacted. Route lookup on encryption is costly.”

“SASE is still a hodgepodge of technologies being combined,” Raza said. “What is true SASE? The reality of what we see is its lot of technologies to stitch together.” SSE, an offshoot of SASE, is also struggling. Companies that have to handle and manage tunnels are wasting resources on that, in Raza’s opinion.