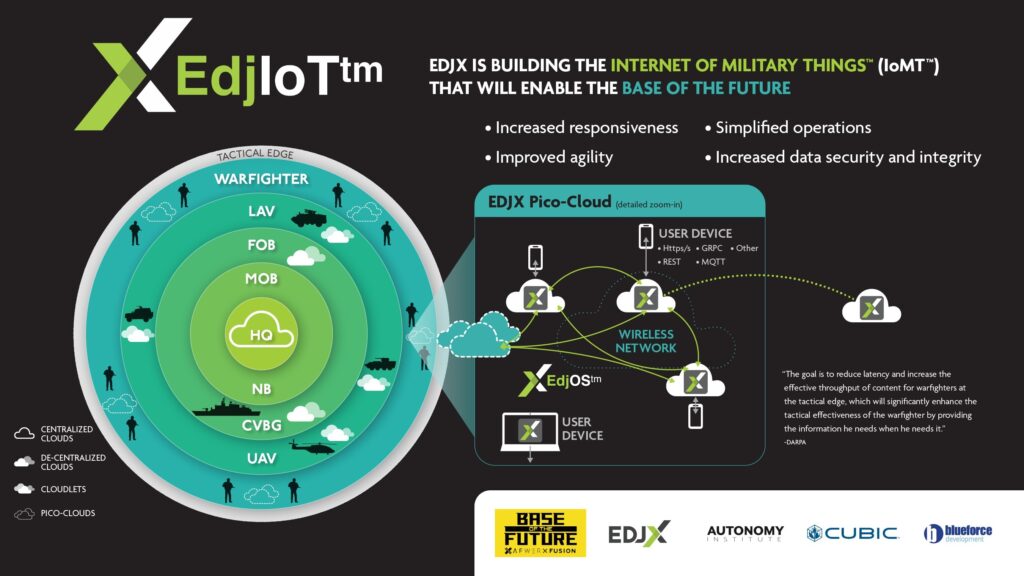 The Internet of Military Things Edge Platform is a converged infrastructure solution consisting of EDJX EdjOS with Cubic Corporation’s edge compute and networking hardware. Blueforce Development, a leading innovator in sensor fusion, sensor cueing, and Artificial and Predictive Intelligence software at the edge, will become the first certified application developer on the IoMT Platform. The Internet of Military Things Edge Platform, which has significant implications for IoT and advanced AI solutions at the far edge of the network, is the first major solution to be built on the Autonomy Institute GRID that includes Public Infrastructure Network Node (PINN), announced earlier this year. The Autonomy Institute is the conduit for these technologies combining to form a transformational end-to-end IoT solution from base to battlefield, solving immediate challenges for the military and civilian first responders.

The Autonomy Institute Alpha Lab at Camp Mabry will be available to developers to build, test and deploy next generation IoT solutions providing the blueprint for public safety, military and civilian use cases. The Alpha Lab is part of operationalizing the PINN, which will have significant implications for public safety and disaster response. PINNs will enable first responders to accelerate emergency and disaster response with intelligent infrastructure and facilitate humanitarian assistance with disaster relief and domestic operations.

The IoMT Edge Platform is part of the broader future of AI at the edge and IoT story as a key proof point in an emerging market. IoT and 5G marks AI at the edge, the processing of AI algorithms on edge, on users’ devices. Internet of Military Things is an emerging application of this technology, transforming military security and connectivity.

“We are excited to support the launch of the Autonomy Institute Alpha Lab. Camp Mabry and the Texas National Guard have become a center of gravity for research and innovation,” says Lt. Col. Alex Goldberg, Southwest Region Engagement Lead for the Defense Innovation Unit. “We are continually looking to leverage and accelerate the adoption of new commercial technology and novel architecture deployments like the PINNs. This Lab will help bring the concept of the Internet of Military Things to fruition by acting as a pathfinder for our systems to connect, share data, and learn. As a nation, we need to move faster if we are to meet the challenges of tomorrow.”

“The EDJX platform is a quantum leap in the field of edge computing because it enables our intelligent IoT and C2 application products to scale from base to battlefield, reducing cognitive lift while increasing the tempo of operations for members of the military and our first responders,” explains Michael Helfrich, Founder and CEO of Blueforce Development. “Military and first responders need actionable intelligence for superior decision-making, where access to data and the fidelity of information is critical to decision-making in time-constrained decision environments.”

Service members and first responders make quick decisions for mission success and for the safety and security of others who depend on those decisions. These individuals operate under intermittent connectivity, weighty and complex gear, and with limited time to assess an environment before acting.  The proliferation of sensors, unnamed vehicles, command posts, and mobile-enabled ground troops has resulted in a battle space that is increasingly complex and sophisticated. Edge computing enables data processing at the tactical edge by decentralizing decision-making changes, bringing the powers of data to the field, providing better information for the military and civilian first responders.

“Our innovative compute and networking platforms have been enabling allied forces around the world to benefit from the emerging Internet of Military Things over recent years. Our partnership with EDJX and Blueforce Development will greatly accelerate the proliferation of intelligent and autonomous solutions,” notes Mike Barthlow, SVP & GM, Cubic Mission Communications and Computing. “We are excited to team up with EDJX, Blueforce, and Autonomy Institute Alpha Lab at Camp Mabry to expand our vision for the safety and security for those operating at the tactical edge.”

The tactical edge comprises the platforms, sites, and personnel (U.S. military, allied, coalition partners, first responders) operating at lethal risk in a battlespace or a crisis environment characterized by a dependence on information systems and connectivity for survival and mission success. Users are fully engaged, highly stressed, and dependent on their information systems’ availability, integrity, and transparency.

“Launching the IoMT Edge Platform in partnership with Cubic ushers in the era of Industry 4.0 by bringing all of the key ingredients missing in the pursuit of mobile, intelligent, and autonomous systems development,” said John Cowan, EDJX co-founder and CEO. “Innovation will be at the heart of this project and we are excited to work with leading innovators like Blueforce and the Autonomy Institute in the effort to create the future.”