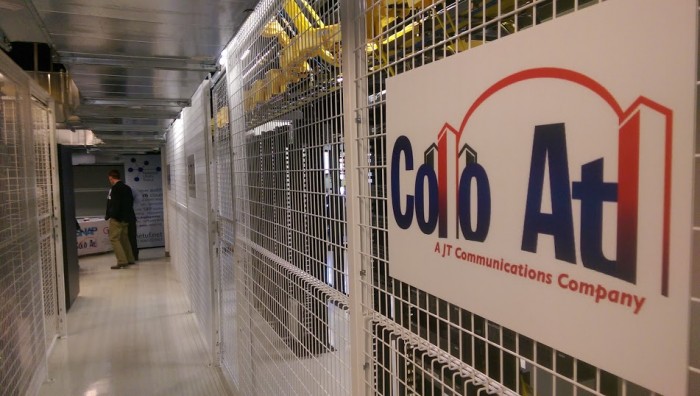 Details: Colo Atl has a ‘traditional’ centralized data center at the 55 Marietta carrier hotel. American Tower acquired it just over a year ago as an initial foray into colocation and edge compute infrastructure. The facility has undergone upgrades and renovations and provides colocation and interconnection services, with a number of wirelesss tenants. The new edge facility is located in suburban Atlanta in Ben Hill, Georgia (about 15km southwest of Atlanta). This is a micro/modular edge data center housed in a container-style enclosure. Colo Atl is partnering with EdgePresence, a builder of these micro data centers. The data center covers 360 sqft and supports 100kW of power. There are eight cabinets for customers: three full cabinets and 20 1/4 racks. The data center is carrier-neutral and connected via dark fibre back to the Colo Atl facility at 55 Marietta.

Location: The edge data center is situated at the ground space that surrounds a wireless tower. This provides proximity to both wireless and terrestrial connectivity. The idea is to place small increments of compute infrastructure outside centralized locations so that end users and devices can access it at minimal levels of latency, while backhauling everything else to centralized data center infrastructure – in other words, the Colo Atl data center in downtown Atlanta.

New locations: While American Tower has used Atlanta as an incubator of sorts, it is planning to take the edge-core compute concept across to new locations. It has mentioned Austin, TX, Boulder, CO, Denver, CO, Pittsburgh, PA and Jacksonville, FLA as targets.

Edge and core: American Tower has built out a colocation footprint under its own banner that combines a centralized core with a smaller location out at the edge. Customers will be able to set up shop in either location (more likely both together) and presumably in future ones. Scaling this will mean deploying more micro data centers at the base of other wireless towers within American Tower’s portfolio. Each of these edge facilities will revolve around the core (the hub with the edge locations representing spokes) and drive traffic, interconnection and colocation consumption. Interconnection at the core will be crucial for driving margins. Once American Tower takes this deployment model to other markets, it is likely that it will also have to set up a centralized core location at a colocation facility in lieu of being able to buy another Colo Atl (though it would likely be interested in these kinds of assets should they be available). Both Boulder and Denver listed above as target markets makes sense as a core around Denver and edge around Boulder could be constructed.

American Tower would not be normally thought of as a data center operator and its acquisition of a data centre last year largely flew under the radar. But a year on, its strategy is becoming clearer. American Tower’s ownership of communications building blocks position it (and other digital-focused REITs) at the center of this emerging ecosystem with data center, connectivity and interconnection tied together across core and edge. Providing edge compute has certain limitations to be sure. It is tougher to scale and the smaller increments can only drive so much revenue. It will take both operational acumen and a lot of automation to maintain efficiency. The way to make up for the potentially smaller revenue streams is to build ecosystems around these core-edge deployments that attract quality customers and encourage interconnection uptake. This is exactly what American Tower is trying to do here as it looks for a way to drive more value out of assets it already owns and operates. What they are doing shows again how edge and cloud work together and are not mutually exclusive.